Celebration of Mentoring at MGH 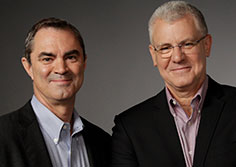 The Center for Faculty Development celebrated the vibrant mentoring culture at MGH! The event recognized recipients of 2020 departmental, MGH-wide, and Harvard mentoring awards. In particular, the winners of the 2020 Graduate Student Division PI Mentoring Award and the 2020 John T. Potts, Jr., MD Faculty Mentoring Award were be announced and said a few words. In honor of this being the tenth year of the Potts Award, the CFD created a special Potts Award 10th Anniversary booklet in honor of all the recipients.

Keynote speakers: W. Brad Johnson, PhD, and David G. Smith PhD, authors of Athena Rising: How and Why Men Should Mentor Women and Good Guys: How Men Can Be Better Allies for Women in the Workplace.

W. Brad Johnson, PhD, is professor of psychology in the Department of Leadership, Ethics, and Law at the United States Naval Academy, and a faculty associate in the Graduate School of Education at Johns Hopkins University. A clinical psychologist and former commissioned officer in the Navy’s Medical Service Corps, Dr. Johnson is an award-winning mentor with distinguished mentor awards from the National Institutes of Health and the American Psychological Association. He has served as chair of the American Psychological Association’s Ethics Committee and as president of the Society for Military Psychology. Dr. Johnson is the author of more than 130 journal articles and book chapters—many on the topic of mentoring—and 14 books, in the areas of mentoring, gender in the workplace, and professional ethics. He speaks around the globe on the topics of mentorship and cross-gender workplace relationships.

David Smith, PhD, is Associate Professor of Sociology in the College of Leadership and Ethics at the U.S. Naval War College. A former Navy pilot, Dr. Smith led diverse organizations of women and men culminating in command of a squadron in combat and flew more than 3,000 hours over 30 years including combat missions in Iraq and Afghanistan. As a sociologist trained in military sociology and social psychology, he focuses his research in gender, work, and family issues including gender bias in performance evaluations, dual career families, military families, women in the military, and retention of women. He is the author of numerous journal articles and book chapters that focus on gender and the workplace, and co-author of both Athena Rising and Good Guys.